This month, Truck Driver will be available on the Epic Games Store

Truck Driver is a new truck driving simulator from Soedesco. The studio made a bit of a mark back in 2019 when it launched the title first on consoles. Considering how truck sims (at least, the actually good ones) have been a heavil…

Lorry driver caught with £1m worth of cocaine

A lorry driver has been jailed for nine years after attempting to smuggle £1 million worth of cocaine into Dover.[1]

Robertas Trimailovas, from Lithuania, was stopped at the town’s docks last month and Border Force officers searched his cab.

The 46-year-old was interviewed by the National Crime Agency and subsequently charged with importing a class A drug.

He pleaded guilty at Canterbury Crown Court on Monday, and was today sentenced to nine years behind bars.

NCA Dover branch commander Martin Grace said: “Drug runners like Trimailovas should be in no doubt about our determination to catch them and bring them to justice.

“Class A drugs bring violence and exploitation to our communities, and working with partners like Border Force we are committed to disrupting the organised crime groups involved.”

NCA says the drugs would have sold for about £1 million on UK streets.

Read more: All the latest news from Dover[2]

Road closed after HGV flips over at roundabout

A road has been closed in Knowsley after a HGV tipped over at a roundabout.

Police were called out to School Lane in Knowsley[1] at around 2pm today (Friday) following reports of an accident involving a HGV.

School Lane was closed while police made the scene safe.

Photographs posted online showed a large HGV laying on its side in the road , blocking the roundabout near Kitling Road.

Nobody was injured, police[2] have said.

The roads policing unit posted a statement which read: “Thankfully no injuries here after this HGV failed to negotiate a roundabout in Knowsley industrial estate. Closure in place on School Lane please avoid whilst we recover the vehicle.”

Get a Liverpool Echo newsletter today

The Liverpool Echo sends newsletters on a wide range of topics – including our daily news bulletin, now going out three times a day.

There are others on what’s on, politics, court news, Knowsley, Wirral, and arts & culture, as well as both Liverpool FC and Everton FC.

Signing up is free and it only takes a minute for you to get the biggest stories, sent straight to your inbox.

How to sign up for an Echo Email Update

1) Go to our dedicated newsletter page at this link[3].

2) Put your email in the box where indicated

3) Tick as many boxes as you like, for each newsletter you want.

4) Press Save changes and that’s it!

Travel information service INRIX posted a comment which read: “School Lane closed due to overturned lorry at Kitling Road. Traffic is coping well. On the roundabout.”

For the latest news and breaking news visit http://www.liverpoolecho.co.uk/news/[4].

Get all the big headlines, pictures, analysis, opinion and video on the stories that matter to you.

We’re also on Facebook/theliverpoolecho – your must-see news, features, videos and pictures throughout the day from the Liverpool ECHO.

As a subscriber, you are shown 80% less display advertising when reading our articles.

Those ads you do see are predominantly from local businesses promoting local services.

These adverts enable local businesses to get in front of their target audience – the local community.

It is important that we continue to promote these adverts as our local businesses need as much support as possible during these challenging times. 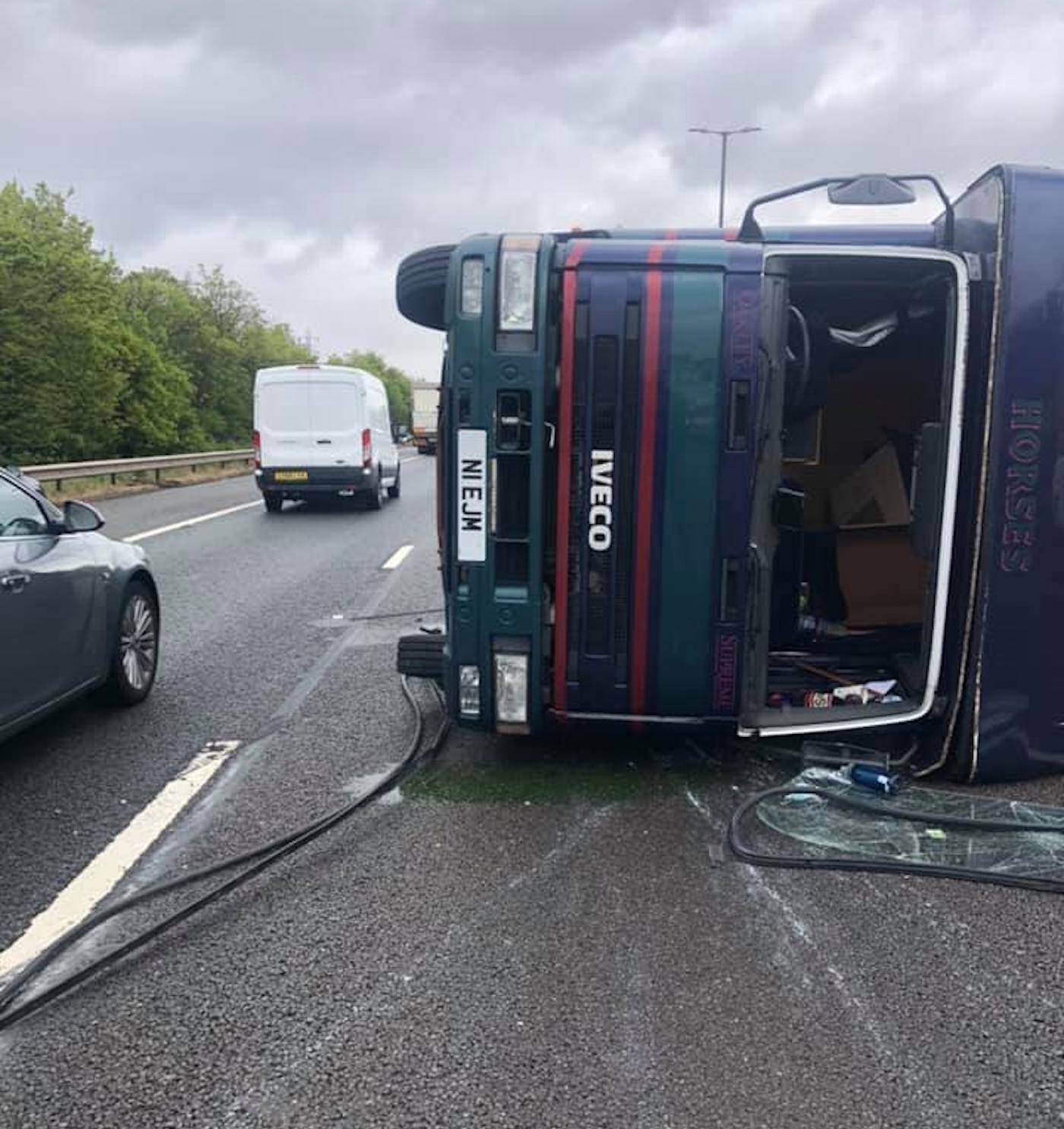 ‘There we were, standing on the A1, with articulated lorries doing emergency stops, and the wagon just went up’

“If by sharing this I can make some people think about their road manners, it will be worth it.”

If you want to keep up with the latest from the equestrian world without leaving home, grab a H&H subscription

Learning curves and pheasant dodging: Charlotte Dujardin does the double at Wellington *H&H Plus*

£8.5m of cocaine found in lorry at Harwich Port

A lorry driver has been arrested

Cocaine worth £8.5 million has been found in a lorry at Harwich Port.

A lorry driver from Poland has been charged after 107 kilos of the drug were found in a trailer earlier this week.

Lucas Wesolowski, who’s 28, will appear in court next month.

He was arrested after the class A drugs were found in the trailer of an HGV which had arrived on a ferry from the Hook of Holland on Wednesday (12 May).

The NCA began an investigation after border officers found the cocaine in taped packages, which had been placed in sacks on top of a load of washing machines and tumble dryers.

After being questioned Wesolowski was charged with attempting to import a class A drug, and following an appearance at Colchester Magistrates on Thursday (13 May) he was remanded in custody until his next appearance at Ipswich Crown Court on 10 June.

“This was a large amount of cocaine, which would have been worth around £8.5 million if cut and sold on the streets of the UK.

“Losing it will be a big blow for the criminal network likely to be behind this attempted importation – profits which they will not be able to invest in other criminality.

“Working with law enforcement partners like Border Force, we are determined to disrupt the organised crime groups involved in drug supply and protect the public.”