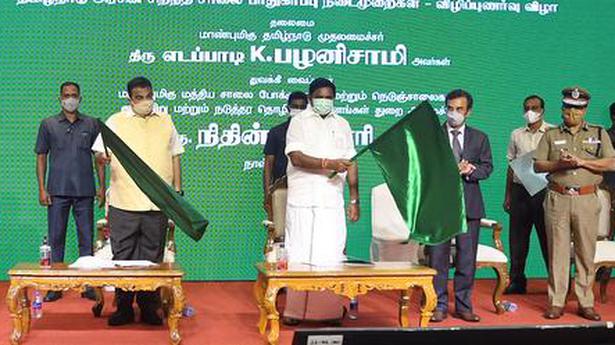 Union Minister for Road, Transport and Highways and Micro, Small and Medium Enterprises Nitin Gadkari praised the State government for setting an example in bringing down the road accidents and praised Chief Minister Edappadi K. Palaniswami and all the stakeholders for being a model State in road safety. Mr.

Gadkari was delivering his keynote address after launching a number of road safety projects in the State at a function here on Tuesday. He urged the Chief Minister to focus on the opportunities available in sea transport as a viable public transport medium. Mr.

Gadkari said the Chennai-Bengaluru Green express highway project work would begin in two months. Highlighting that most of the road accident victims were from the poor families, he rued that accident benefits did not reach them. Mr.

Gadkari flagged off the road safety patrol vehicles, launched enforcement-related equipment to the police departments of three districts of Kancheepuram, Chengalpattu and Tiruvannamalai and opened the medical equipment installed at Trauma Care Centre at the Kancheepuram Government Hospital. The Chief Minister, after distributing the road safety awards to the Collectors of Salem, Thanjavur and Tiruvallur districts, said the government had adopted a five-point approach to road safety projects after having a tie-up with the Indian Institute of Technology Madras. The five points were removing black spots, training on road safety, integrated road safety measures, strengthening the road patrol enforcement and improving the road quality.

Hartwig Schafer, Vice-President (South Asia Region), World Bank, praised the State for the impressive efforts taken in road safety by implementing the Automatic Speed Enforcement System and Advanced Traffic Management System on the ECR from Akkarai to Mamallapuram, which was being funded by them. Chief Secretary Rajeev Ranjan, Additional Chief Secretary and Home Secretary S.K. Prabhakar and DGP J.K.